National Health Corps (NHC) is an AmeriCorps National Service program that recruits, trains, and places paid volunteers in resource-limited organizations called "host sites." With support from a grant from AmeriCorps, NHC's members help build healthy communities by providing essential health education and access services to individuals throughout the United States. A key priority for the NHC program is to eliminate health disparities and the underlying structural oppression* that perpetuates them. 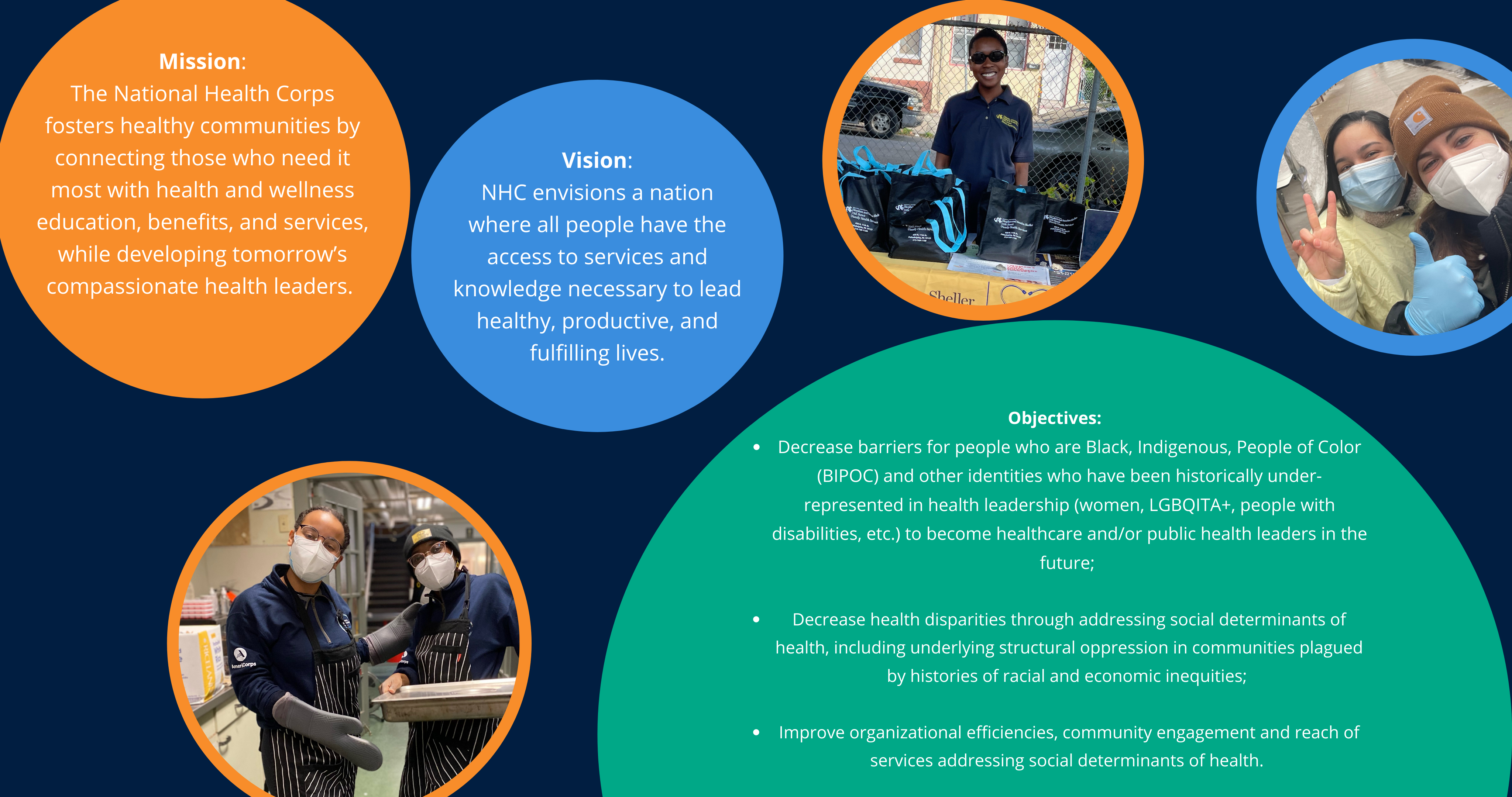 The National Health Corps has operating sites that administer the program in Chicago, Delaware, Florida, New York, Philadelphia, Pittsburgh, and San Francisco. NHC members serve at over 85 host sites in these communities, which include community and school-based health centers, county health departments, hospitals, and nonprofit and community-based public health organizations that experience challenges due to budgetary constraints and new demands for expansion and transformation of delivery systems. NHC members will produce significant and unique contributions to host sites' existing efforts to improve health outcomes in underserved communities by engaging in activities that confront community health needs, but would not otherwise be possible due to the lack of adequate funding, staffing, and resources at their host sites.

NHC is an AmeriCorps program with a long, proud history. Over the past 27 years, more than 2,400 NHC members have completed more than 2.4 million hours of service. At a time of unprecedented need and severely limited resources, NHC members have the opportunity to make lasting contributions in the communities in which they serve.

NHC is one of the original AmeriCorps programs funded by AmeriCorps, formerly the Corporation for National and Community Service (CNCS). The NHC grew out of a program first funded in 1994 by CNCS and the Health Services and Resources Administration (HRSA), a division of the U.S. Department of Health and Human Services, which served as the coordinating agency. Three sub-grantees in Chicago, Philadelphia, and Pittsburgh, then known collectively as the HRSA Health Corps, were the founding sites of what has grown into the NHC. In 1997, through a planned transition, the Allegheny County Health Department became the direct grantee of CNCS, issuing sub-grants to Philadelphia and Chicago and assuming the coordinating responsibilities of the NHC Parent Organization. At that time, the program name was changed to the NHC.

During the 2003 program year, the NHC was temporarily shut down when CNCS was forced to temporarily reduce funding across its program portfolio. However, the three original operating sites were determined to continue their collaboration and re-applied for funding in the following cycle. They were successful in receiving an operating grant, which included funding to support a new site in Florida, and re-established operation of the NHC in 2004 with the Health Federation of Philadelphia as the CNCS direct grantee and NHC Parent Organization. In 2010, the NHC successfully re-competed for funding and was able to bring on a fifth operating site, the Atlanta Health Corps, and to expand its member slots to 94 full-time members. In 2013, the NHC again successfully re-competed for funding and realigned the program to include four operating sites with 88 members. In 2016, the NHC successfully re-competed for three years of funding to include four program locations in Philadelphia, Pittsburgh, Chicago, and Florida with 90 total members. In 2019, the NHC successfully re-competed for another three years of funding to include 119 members serving throughout Chicago, Florida, New York, Philadelphia, Pittsburgh, and San Francisco. In 2021, with the support of funding from the CARES Act, NHC expanded to a seventh operating site in Delaware to focus on addressing the COVID-19 pandemic.

*NHC defines "structural oppression" as the multiplicity of ways that white/cisgender/heteronormative/ableist supremacy oppresses society, as well as the systematic and systemic ways that privilege is used to produce or reproduce inequity.