Anything is Possible if You’re a Girl on the Run!

Being a member of the Pittsburgh  Health Corps allows me to give back to the community while promoting healthy lifestyles. As part of my year of service, I am a coach for an afterschool program in Homewood called Girls on the Run. Girls on the Run is a program designed for 3rd-5th graders to inspire young girls to be active, joyful, and confident using an experience-based curriculum which creatively integrates running. Throughout the season, the girls prepare for an end-of-season 5K race, as well as learn about healthy lifestyles. This past Fall I coached 9 spunky, energetic, and amazing girls.

I love the program because it promotes physical activity in a fun and engaging way. While the main message is physical activity, the girls are also learning about self-image, bullying, healthy eating, being positive, and supporting others throughout the season. Girls on the Run is a crucial program that promotes healthy lifestyles in at-risk youth, many of whom do not understand the benefits of physical activity or are faced with numerous social and economic barriers to being physically active. It was so much fun to watch the girls improve in their running, and watch them grow as individuals.

Member Emma shows off her A at the Girls on the Run 5k!

One of the most exciting moments during the season was watching the girls organize a community impact project. In addition to the running portion of the program, the girls learn about service and the importance of giving back to their community. Each team completes a Community Impact Project, which is planned solely by the girls working together as a team.  This year, the girls decided to have a bake sale and donate the proceeds to Children’s Hospital of Pittsburgh of UPMC.  Homewood is a community of Pittsburgh that lacks many resources and is generally very underserved; to see the girls take pride in their community and work within it for the greater good was amazing. It was exciting to see that many of these young girls are just as passionate about community service as I am!
Two weeks ago, the nine girls in Girls on the Run completed their end-of-season 5K race alongside all of the other teams throughout Pittsburgh. It was a very exciting day for the girls, and it was great to see them so excited to participate in the race. I was so proud to see all of them finish the entire race and see the joy on their faces when they received their medals! 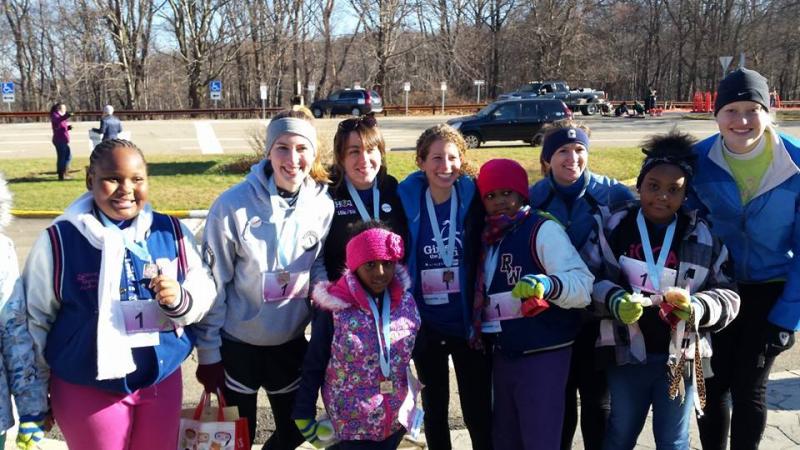 At the beginning of the season, many of the girls said that running a whole 5K would be impossible. Yet they proved themselves wrong! Something many of them never thought was possible at the beginning of the season suddenly become a goal that was feasible. After putting their minds to it, and training for the race through Girls on the Run, they all reached their goals of finishing the 5k! I hope that this lesson will stay with them throughout their lives- by setting a feasible goal and working towards it each day with peer support to push them along, they were able to achieve what seemed impossible!