Can't Rain On This Parade 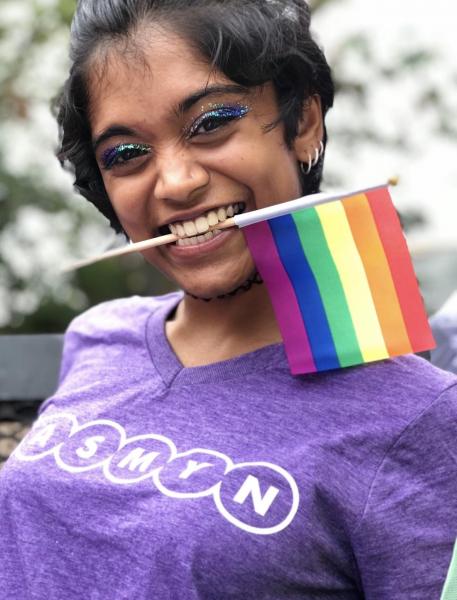 June in Jacksonville, to a Chicagoan like myself, induces a feeling that is best compared to skipping into a bed of lava and immediately turning into a molten, steaming slurry yourself, all within a few seconds of stepping outside. This oppressive season also signals the impending end of my service term at JASMYN, and sitting at my desk (AC heaving at full blast) I reflect on the past 47 weeks and how deeply they have changed me, in ways that I couldn’t possibly have imagined.

June also marks Pride month in multiple cities, including Chicago, though other cities in countries around the world plan their festivities for different months; for example, Jacksonville conducted its 2017 festival in October. However, June in particular holds a lot of significance for Pride Festival because it commemorates the 1969 Stonewall riots, a watershed moment in the modern movement for LGBTQ+ rights. Far from the somber marches that took place on the weekend of June 27th, 1970, today's pride festivals are vibrant, jubilant, ecstatic celebrations, permeated with color, music, dancing and a sense of community, of belonging and a fierce pride in, of, by and for the LGBTQ+ community. Historically, Pride’s month of festivities have, to me, my friends and many others, catalyzed a renewed awareness for the challenges the LGBTQ+ community still faces, despite all that it has overcome, and reinvigorated our desire to be an ally for the community. This year, I reflect on my experiences with LGBTQ youth at JASMYN to redefine what allyship and community involvement means to me.

Pride’s celebrations, far from merely being a big, exciting party, is absolutely critical. Pride is also a reflection on the progress that has been made in securing equal rights and protections for LGBTQ+ people under the law. Only recently (June 26th, 2015) was same sex marriage established in all 50 states; even more recent, in February of 2017, was the Human Rights Ordinance that outlawed discrimination against the LGBT community in Jacksonville. But despite said progress, I could go on and on about the pervasive disparities, discrimination, social and systemic violence LGBTQ+ communities continue to face today, here in the US and all over the world. Especially in Jacksonville where, just within the month of June, two trans women were murdered- the 2nd and 3rd to be killed and 4th to be shot in Jacksonville out of the thirteen trans women that have been murdered in this country this year. In the face of such atrocities, one day/week/month of donning rainbows, sparkles, and a certain retailer’s latest marketing stunt may be a...start, but it isn’t nearly enough, and performative allyship is very real and toxic. Being an ally takes experience, growth, willingness and awareness. It’s a journey, and journeys take time.

For me, allyship represents reflection and action, intentional, inclusive and steadfast. Pride is found in service and labor, celebrated every single day in acts of love, resistance, and solidarity. How are some ways you celebrate Pride and practice being an ally? Here are ten lessons that have helped me grow as an ally this year.

1. Educate yourself, and allow yourself to be educated. Be curious and ask loads of questions, but don’t assume. Actively seek out (and support) LGBTQ+ created or centric media. The onus is on you to follow this step; it is not the job or responsibility of a marginalized person to educate you on their experience, but their choice; you are not entitled to their emotional labor.

2. Be respectful of the community’s space(s)- sometimes, it just isn’t about you (even if you yourself are a part of the community!) and you’ve got to check your privilege at the door, depending on the space you find yourself in. Make it a priority to elevate their needs and actively uplift their voices, even when it is above your own.

3. When someone checks you, don’t take it personally: listen and reflect. Like I said, it’s happened to all of us on this allyship journey we’re on. Because everyone makes mistakes, but a willingness to learn and correct yourself goes a long way.

4. Honor pronouns. If you get it wrong, don’t get yourself into a tizzy about apologizing- this makes an awkward situation even worse and shifts the attention/focus onto you. Despite my cis privilege, during introductions I tend to automatically follow my name with my pronoun. “Hey, my name is Chitra, I use she/her pronouns- how ‘bout you?” It may take some people aback, but you’re initiating an opportunity for an important conversation, one that affirms people’s identities while paving the way for others to do so as well. And in my experiences, people have tended to respond in a positive way, with curiosity or gratitude.

5. Intersectionality- don’t assume that all LGBTQ+ people are alike- hence the string of unique letters and the plus sign. In addition to encompassing a myriad of identities, sexualities and gender expressions, individuals also vary in their race, cultural and socioeconomic background, lived experiences, and anything else you can think of. Listen to their stories- you’ll thank me later. Practice cultural competence and if you’re not sure how, ask, watch and listen.

6. Don’t be a bystander. Respect your own boundaries, but remember that inclusivity is an intentional act, one that often elicits disrupting the natural order of things. And challenging toxic norms or behaviors can be, well, challenging.

7. The value of your dollar is better spent on donations to supportive organizations, or through your time and community service/engagement/activism, than on merchandise (with exception). Obviously, support LGBTQ+ artists and wear rad, queer things, but try to spend your money on items and services that directly benefit the community. Economic expression is political expression.

8. Speaking of economic expression, fundraise for organizations that directly support the community (after doing some research on how they allocate their resources!).

9. And with respect to political expression...first of all, vote. Inform yourself on a candidate’s platform and pay particular attention to whether they’ve supported the LGBTQ+ community in a meaningful, community centric, consistent, sustainable and culturally competent way. Vote for those candidates.

10. Navigating gender, sexuality, expression and identity (http://www.transstudent.org/gender/), like allyship, can be a journey. People experience this journey in different ways. Listen to each person without judgement or an agenda and honor who they are and where they’re at, as they are. And above everything else, respect their rights to privacy and confidentiality- outing someone can carry devastating, potentially fatal consequences.

At this point, you (if we are alike) are probably wondering who or what gave me the right to define allyship in any way, and why. Do I consider myself to be an ally?

When I started my service term, my understanding and interpretation of the term was so vastly different from what it is now. I didn’t think that I was competent, experienced, or informed enough to be an ally; I had so much to learn about queer culture (as a teeny tiny example, I’d never watched RuPaul’s Drag Race! My life would never be the same!) and was nervous that my background and privilege would prevent me from adequately supporting the youth I’d be serving. I knew that I would have to bridge these differences before I could figure out what allyship meant.

I’ve made many mistakes this year, and most of these arose from not considering the needs of the community, as defined by the individual. I have corrected a community member’s misgendering of a JASMYN employee’s pronouns without considering whether the employee would have appreciated this gesture, or whether I’d inadvertently be outing or embarrassing them. I have stumbled through verbose PowerPoint presentations without considering how the content and delivery style would be received, let alone integrated by a 16-19 year old audience. I have tried to convince, cajole, coerce, do everything short of forcing a youth to attend a primary care appointment without considering the fact that their needs and everyday circumstances didn’t align with my own agenda. And I can go on- if I’d told myself of these incidents in August, I’d have considered myself forever disbarred from ever attaining ally status, walked away with my tail between my legs.

But in growing as and into an ally, I had to learn to practice self-care, forgiving myself for any gaps in my knowledge and skill but making it a priority to educate myself, by seeking guidance from LGBTQ community members themselves; here, I was lucky to be surrounded by not only the youth but also other JASMYN employees, most of whom are proudly out in their respective communities. I improved my listening skills and began to ask more questions. I became more youth centric, seeing the individual behind the community, by immersing myself in their stories to understand their personal, pressing circumstances and desires, elevating their needs instead of pushing, based off of my rudimentary public health knowledge and a few documentaries, what I assumed their needs would or should be.

Looking back now, in many ways, I was right- I had so much to learn. But today, I don’t view this as a failing. Today, I envision the ideal ally to be, above everything else, intentional, compassionate, and determined. A culturally competent and community minded steward for dialogue, a critical thinker, active listener and a lifelong learner who advocates for those who are unable to do so. An ally is a friend, an ally is a lover, an ally uplifts you through your rough patches and rejoices alongside when you triumph through. I realized that I could be an ally, and I was slowly, but surely, inching my way towards it. I don’t think it is up to me, deeming myself an ally or not- all I know is that this is ultimately my goal. Moreover, I don’t claim any right to defining, dictating, or proselytizing its plethora of meanings, all of which I’ve found to be heavily individualistic.

The biggest shift in my own, personal understanding of what it means to be a good ally comes from my defining it as a markedly intentional, willing, adaptive and personalized journey, as opposed to a destination, or some gilded status of knowledge and experience. And though I can be sure that I’ll continue to make mistakes, through my experiences as an National Health Corps Florida member at JASMYN, I know that in each mistake lies an opportunity for growth, an opportunity for supporting another youth in the way that’s centered with their needs in mind. 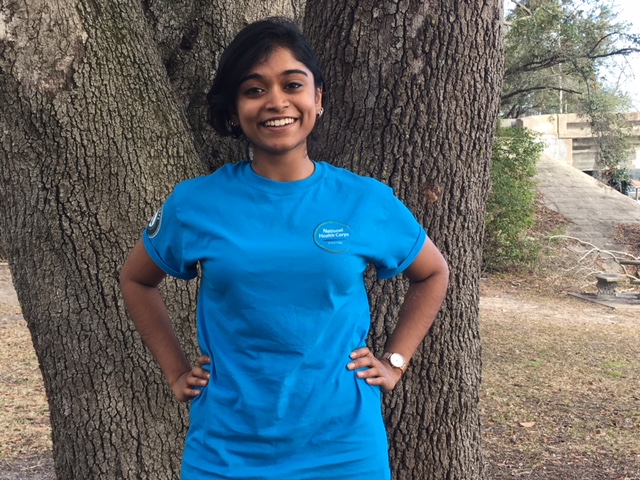 Chitra served at JASMYN as a Care Coordinator.